Another bus ride, another crazy driver, and more passengers throwing up. We witnessed our first ugly North American (French Canadian, specifically)... after asking for gum from a young man in his tienda, she didn't have enough money to pay for it. So she said angrily in English, 'that´s all I have' and took the gum. Jina made up the difference after the woman walked away. We weren't as sympathetic to her stomach troubles after that. Would she do that in Canada?

Antigua is the old capital of Central America, and retains the stateliness and elegance despite several devastating earthquakes. Ruined churches and buildings interweave with colorful one-storey colonial houses, cobblestone roads (being repaired with new cobblestone). Feels like it's been pulled straight from southern Spain. The locals are sophisticated and spend their nights hanging out on the town square, lit up for Christmas. We settled in to our hotel, and made guacamole on the roof with three volcanoes as backdrop. A little tired from buses, we decided to relax in town for a couple of nights. We hit market day and bought tons of fruit, including a new one to us: zapote. We used our haggling skills developed in Panajachel. Taking off tomorrow for Guatemala City on our way to El Salvador. 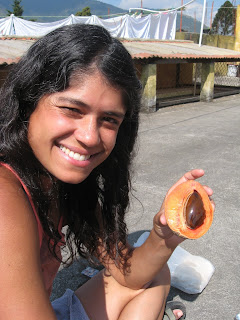 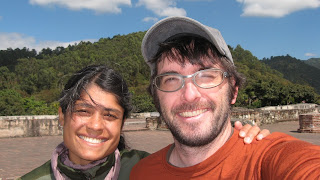 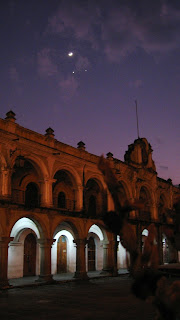 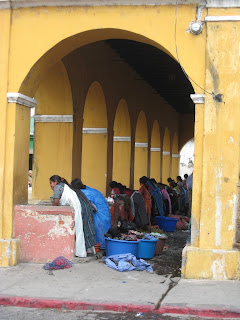