The City of Children

Lucas and I packed up, put our traveling shoes on and waited for a bus by the roadside. A pickup truck swung by and the gringo driving said he'd drive us to La Libertad, where we were headed. On the way, he told us about the intermittent work he does at the nearby orphanage, and how they're always looking for help. And all their computers are busted. We gave it about a second of thought and told him we'd stay and help. So we turned right back around and headed to the orphanage.

The orphanage is run by a charitable Christian organization called REMAR. There are 95 children there, ages 6 months to 18 years. They come from all kinds of situations, but all from homes with abuse, neglect or abandonment. So it was amazing to be greeted by about 40 hugs each when we arrived. The kids all live, work and play together all day. Like having 94 other brothers and sisters. One night when we left, the kids were all singing and hauling dirt for their new school, late into the night. On their beds they put all their stuffed animals, in various patterns, which Lucas could identify with. Stuffed animals, clothing--everything is shared, since it's too hard to keep track of personal belongings. The kids were not shy about sharing their personal stories with us, most of them heartbreaking. 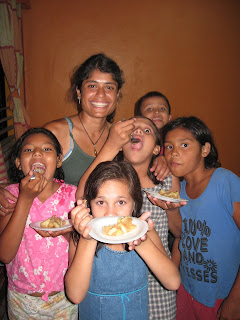 There are only 5 women looking after all the kids and they do an incredible job at keeping all the kids clothed, fed and happy. Incredible job is an understatement. I never saw a raised voice or kids picking on each other in our 4 days there. Instead, we took them to the beach. What a crazy day. They had more fun than seems humanly possible. We made apple crisp from all the green apples they didn't know what to do with, and Lucas played guitar with his Salvadorean younger self, a kid named Jose. We replaced a pot we broke, by navigating the market in San Salvador, and Lucas managed to fix 6 or so computers that had been donated and then poorly treated by their computer teacher. 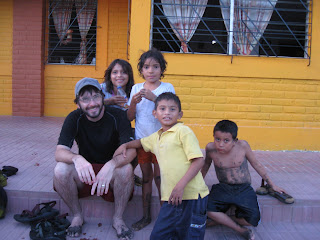 The organizing principle is a love for God and each other. The city of children is actually the center of REMAR's substance abuse rehabilitation program for adults. Part of the program is that the recovering adults work at the orphanage. Sounds like a crazy idea, but I think the children move them in ways they had never been before. We'd love to continue to support them in the years ahead.

Our second attempt to leave El Tunco was successful. Friends at REMAR dropped us at the bus station in San Salvador and we caught the bus to San Miguel. It's blazing hot here as we prepare to cross two borders tomorrow, into Honduras and then into Nicaragua.
Posted by Jina at 2:18 PM

That's so amazing. What a lovely story. Nice of you to replace the pot you broke. I'm sure Jose appreciated it.

An old-fashioned Dutch way of saying you like someone is: "You can break one of my pots". (Je kan bij mij wel een potje breken).