A pair of good legs. I was missing mine for a few days, but with some determined R.I.C.E. application, they're coming back to me. We were glad to stay, both for the healing power of rest, and the opportunity to get to know the area a little better.

We attended the Quaker meeting for worship this morning, meeting some of the founders of the town. It's been since high school since I sat in silence with others for an hour and meditated on life. And Lucas' first Quaker meeting for worship. A local man was moved to stand up and said that he had been thinking of the quote lately "Life expands or contracts in direct proportion to your courage". The hour seemed to pass in just a few minutes, while we were both lost in thought.

A few nights ago, a fellow traveler at the hostel told me about a strangler fig tree nearby that you could climb up into. Strangler fig trees surround large live trees, kill them slowly, and the original tree eventually dies, leaving a twisted hollow shell. Though dastardly, so many animals and plants then rely on the hollow tree, full of crevices, that it almost evens out. The traveler drew us a map with landmarks like "take a right at the pile of logs where the trail begins". We followed it and found a large strangler fig that had enough hand and foot holds you could get high up inside the tree, to the forest canopy. It was amazing to sit and watch the forest from up high, the tree rocking slowly in the wind. 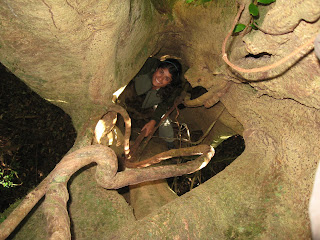 We've reached a traveling groove by now--washing clothes in the sink, keeping each other healthy, finding our way to new places, and meeting other travelers and locals from far flung parts the world. Tomorrow we head out to the capital San Jose, hoping to catch transport to Panama for the new year across the border.
Posted by Jina at 5:13 PM