The day we arrived in Léon I started feeling a bit off, and by the next afternoon I was running a high temperature. I don´t remember large parts of the next couple of days after that. Jina not only took excellent care of me, keeping me hydrated and cool, she also found a clinic around the corner and walked me over. I had some tests taken, and the two hour wait for the results was quite nerve-wracking. It was a bit worrying when the doctor started asking us about mosquitoes in our hotel room, but in the end the diagnosis was a throat infection. I feel much better now, after four days, but I can´t stop sweating.
The experience has been strange for both of us -- for me, being in a fever haze for several days, and for Jina not knowing what was going on with my health, and not being able to leave the hotel for long periods in case something happened. It was like we were on separate vacations for a couple of days, except that both vacations were harrowing. Today was the first day I´ve felt well enough to leave the hotel, or even have a conversation, and it feels good. I shaved, and got a haircut down the street from an old Nica gent named Frank. He cuts hair either with the most confidence or the least care I´ve ever seen -- hacking off large clumps of hair at great speed, and mumbling in Spanish. After three days of illness, I feel like a new man. Though not a bad place to be grounded for a while, tomorrow we finally leave town for the twin volcano island called Ometepe. 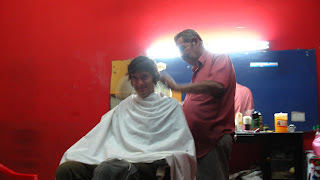 If you ride too many chicken buses, you'll get a throat infection. Take heed, my friend.

Sorry to hear of your illness. I'm glad to hear you're feeling better.

As I feel with many of your posts, I'm really glad you're not dead!
Seriously though, those are scary times. Hurray fo'Jina and the clinic!

Also, get a haircut you hippie!;)

(Seriously though, a shave can be the best thing after cheese, said JJPatchyArms).