Our first taste of Costa Rica was in a small town called Cañas, a truck-stop town right on the Interamericana. The sun was setting quickly, and we found a little hotel that wasn't too expensive. The manager told us of some serious tragedies in his life, but all the while spraying himself liberally with either hairspray or deodorant, we couldn't tell. He was a great help in finding the right combination of buses into the highlands, to the cloud-forest town of Santa Elena/Monteverde.

Monteverde is a community originally founded by American Quakers in the 50's, who moved to Costa Rica to avoid having to disobey their tenet of non-violence in being drafted into the Korean war. When they first arrived, they turned the top of the mountain into a natural preserve, helping to protect two distinct ecosystems on either side of the continental divide. They also unwittingly created a tourism mecca, originally reported by National Geographic. The Quakers have been fighting the development of a paved road into town from the highway in order to curb the tide of tourists. The town still feels small as a result. 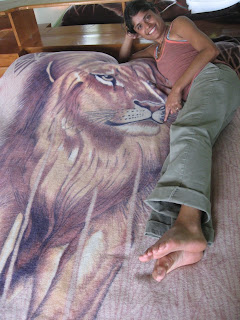 Knowing we would be in town for Christmas night, we found a small hostel away from Santa Elena, right on the edge of the forest with a view of distant Lake Arenal. The room was simple (though graced with an awesome lion bedspread), but the real draw for us was being able to wake up on Christmas morning and hike into the rainforest from our front step. But I'm getting ahead of myself -- clearly, the first priority was a nap. Upon waking, we noticed about 30 people gathering around for a guided night hike. We took the opportunity, and it was worth it. A family of Coatis, a tarantula, sleeping porcupines, sleeping birds (they just sleep on a branch... weird), and a climbing sloth were highlights of the tour; but we also learned a lot about the ecology of the rainforest and surrounding area. Christmas night was windy, the stars were out, and we had a bottle of wine. Lovely.

The next day started lazily, and we headed out into the forest to see what it looked like during the day. The sleeping porcupine was still asleep in the hollow of the Strangler Fig tree, but the tarantula had left its little hole. We couldn't find a sleeping sloth. Things turned a little south when along the path Jina twisted her ankle pretty badly. Back to the hotel we got some ice on it, but we both knew she wouldn't be able to use it for the next couple of days. So we're at a hostel closer to town, taking it easy until Jina's ankle is doing better.
Posted by Lucas at 5:47 PM