From Leon, we caught the slow bus for Granada and spent the morning taking in the walking boulevards lined with cafes. 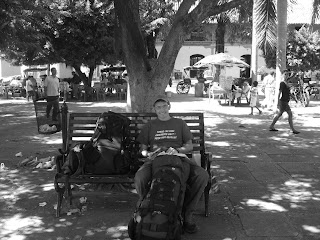 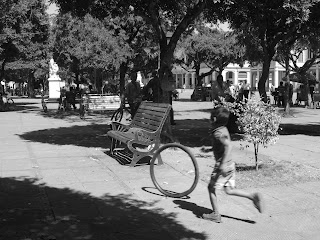 From there, the bus slowly filled to capacity, as it has to before leaving, and we headed south two hours to the ferry terminal. It was almost dusk and the last transport barge was just about to leave. We threw our bags on board the crowded vessel and climbed up to the deck. They took our names, ages and nationality down on paper before departing, and when I asked if it was in case the barge sinks, I just got a smile. The wind comes across the lake with such force, it whips the water into ocean-like swells. And it felt like we were on the ocean as we heaved up and down, enjoying the bizarre sunset ride on the barge, crossing the largest lake in Central America, with the island's two volcanoes looming large in the distance. 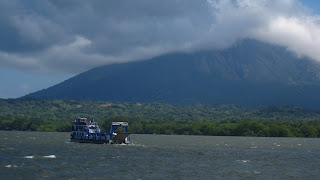 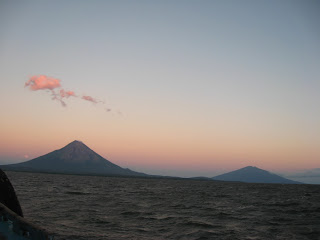 Isla de Ometepe was one of the few places we had pre-planned on visiting on our trip. So it was somewhat surreal to actually be there. That, and the fantasy-like feel of an island where fresh water sharks prowl the surrounding waters, transport is still largely horse and cow, drinks are readily made from tapping a variety of tropical trees, petrogyphs of wildlife are carved on lava rock, and everywhere you go on the island the active volcano Conception is there. 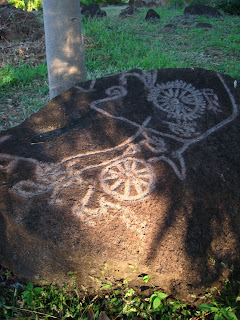 The pace is slower, and the people as genuine as it gets. Adelma, a sassy female taxi truck driver, and I traded simple jokes and we had to stop for an hour on the dirt road as they put up a new power pole. We stayed on the north side of the volcano Maderas and in the morning, climbed it. A long muddy slog for Lucas and I but a beautiful hike through a cloud forest with a crater lake at the top. We got to know Fausto, our 21 year-old guide, and helped him with learning English ("mud!", "watch your head!") in turn learning about life on the island. The hostel where we stayed was so peaceful that we considered staying through Christmas. But decided, instead, to spend the holiday somewhere less hot.

When we left the island by ferry, we still had no idea how we were going to get to Costa Rica. Everyone so far had told us the border was full and there was no more room on buses crossing over. Some stroke of luck was with us, as two spots were available on a bus headed south, not 20 min after we got off the boat. We aimed for a town halfway to the mountains, that we should be able to get to by sunset.
Posted by Jina at 5:32 PM