Arriving in Panajachel, we knew we were right back on the tourist trail, big time. The main drag in town is filled with vendors selling beer t-shirts and homemade textiles, but for good reason. Its the gateway to Lake Atitlan, an enormous lake surrounded by volcanoes (currently in the running for becoming a new Wonder of the World). We tried a new technique of finding a hotel -- one person gets a drink and watches the bags, the other goes scouting. It worked well. 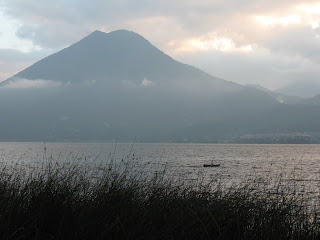 Scattered around the lake are a variety of little communities. Knowing we couldn´t see all of them, we chose San Marcos on the recommendation from our travel book. Out of a boat filled with tourists, we were the only people getting off the boat there -- seemed a good sign. We had stepped into a bizarre hippie ex-pat holistic wonderland. Jina described it as 'the Guatemalan Oregon Country Fair'. Our hotel was El Hotel Unicornio, our room was apparently Uranus. Though not our scene, we explored a little and found some great hidden viewpoints, and the real San Marcos up the hill. It was our first sight of the giant bags of avocadoes being lugged around for sale... incredible. It's like they grow on trees here or something. We did some home cooking for the first time on the trip, hung out with a nice Dutch couple, and dealt with large spiders in the room. Jina had her first real cup of coffee -- not instant! The morning was relaxed, and the view of the volcanoes was incredible, but we decided to move on to where Spanish was the first language again. Antigua was our next stop. 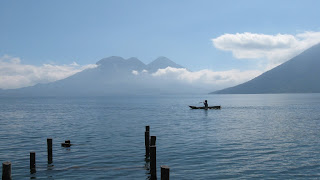 So no Dutch puking? I need to hear more about this story.