The cover of the paper when we arrived in Nicaragua was "Election Sham!". Rioting blanketed the country a few weeks previously, after the Sandinista party, and Ortega, dumped votes in the trash. A recount looks unlikely. Ortega seems to be consolidating power and from the general opinions of people we talked with it's to the demise of the country. Lucas and I were in grade/high school at the time of the Iran/Contra scandal, televised Ollie North hearings, FLMN guerrillas in El Salvador, disappearances in Guatemala, and Ben Linder assassination (an Oregonian volunteer in Nicaragua at the time-- killed by the US backed Contras) but are just now learning about the full history.

If Leon, Nicaragua is the liberal seat of the country, its conservative arch-rival is Granada. These two cities warred for centuries before the capital was created in Managua, splitting the difference. This trip has been an education for us-- lessons in the brutal wars that occurred in each of the countries we've visited, the reasons behind them, and which side the US armed and trained. Being an American traveling in Central America is a humbling experience both for the part our government played in the lives of the people we meet and our ignorance about the details. 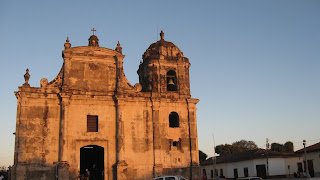 Being an American traveling _anywhere_ is a humbling experience both for the part our government played in the lives of the people we meet and our ignorance about the details.